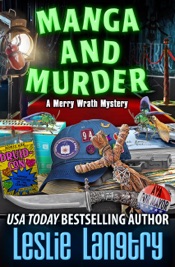 It’s Who’s There, Iowa’s first Druid-Con, a comic book themed convention organized by the teens of The Cult of Nicoderm (a group of four local teens who’ve taken the idea of extracurricular activities a bit too far). Ex-CIA agent turned suburban Girl Scout troop leader Merry Wrath doesn’t know how she was talked into making an appearance at the con as a giant beetle, but once she finds out that her favorite TV horror show host Deliria is going to be there, things are looking up!
Meet Beetle Dork & Deliria…

Always ready to take advantage of any opportunity, the little girls of Merry’s scout troop are at the con in full force and princess dresses, hoping to help ambitious eleven-year-old Ava with her campaign to be the youngest mayor in Who’s There’s history. Unfortunately trouble comes in the form of a confrontation with rival teen druids from wealthy Kennedy’s Landing. And while busy dealing with Betty, the troop's troublemaker who is forging VIP passes and selling conspiracy theories, Merry misses witnessing a show-stopping murder!

…Before it’s too late!

When lovable loser and druid leader Stewie is accused of the murder by a witness, and Betty’s parents consider sending her away to boarding school in Texas for her various and sometimes disturbing pranks, Merry knows she has to move quickly to clear the Dred Demon Stewie’s name and rein in her scout before her troop loses its most awesome (and terrifying) member.

What critics are saying about Leslie Langtry's books:

"I laughed so hard I cried on multiple occasions! Girl Scouts, the CIA, and the Yakuza... what could possibly go wrong?"
~ Fresh Fiction

"Langtry gets the fun started from page one."
~ Publisher's Weekly PDF free