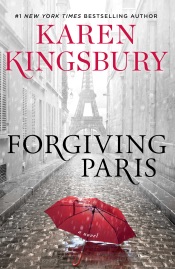 The #1 New York Times bestselling author of life-changing fiction returns with a wise and worldly novel of forgiveness and hope in the City of Lights.

More than two decades ago, Ashley Baxter Blake made her most grievous mistake in Paris. Now, a forgotten voice brings new information about that terrible time, causing Ashley to see that experience in a new light. Can she finally lay down yesterday’s pain and move on?

In Paris, Alice Michel is having dinner with her son Gabe and his new friend, Jessie Taylor, an Indiana girl who is studying abroad for the semester. Alice’s life is so good now, totally different than it was twenty-four years ago. As the dinner conversation goes on, Alice tells the young couple that her long-ago drug addiction nearly killed her. But then her life was saved by a conversation with an American artist. Alice can only remember the girl’s name: Ashley.

Back in Indiana, Ashley and her husband are about to take a twentieth anniversary trip to Paris, where she will have her first French art show. But Ashley is hesitant. She has never forgiven herself for what happened there, and she is dreading the return of memories she’s been holding at bay. Just before the trip, Ashley gets a call from her niece. Jessie explains that her boyfriend’s mother remembers working at a cafe with an American named Ashley. “Could that be you?”

When Alice and Ashley meet, a flood of memories comes for both women, taking Ashley back to a reckless affair and an unexpected pregnancy and Alice to the night she nearly ended it all. Can this new information bring healing and closure? Maybe it is finally time for Ashley to forgive herself...and Paris. PDF free